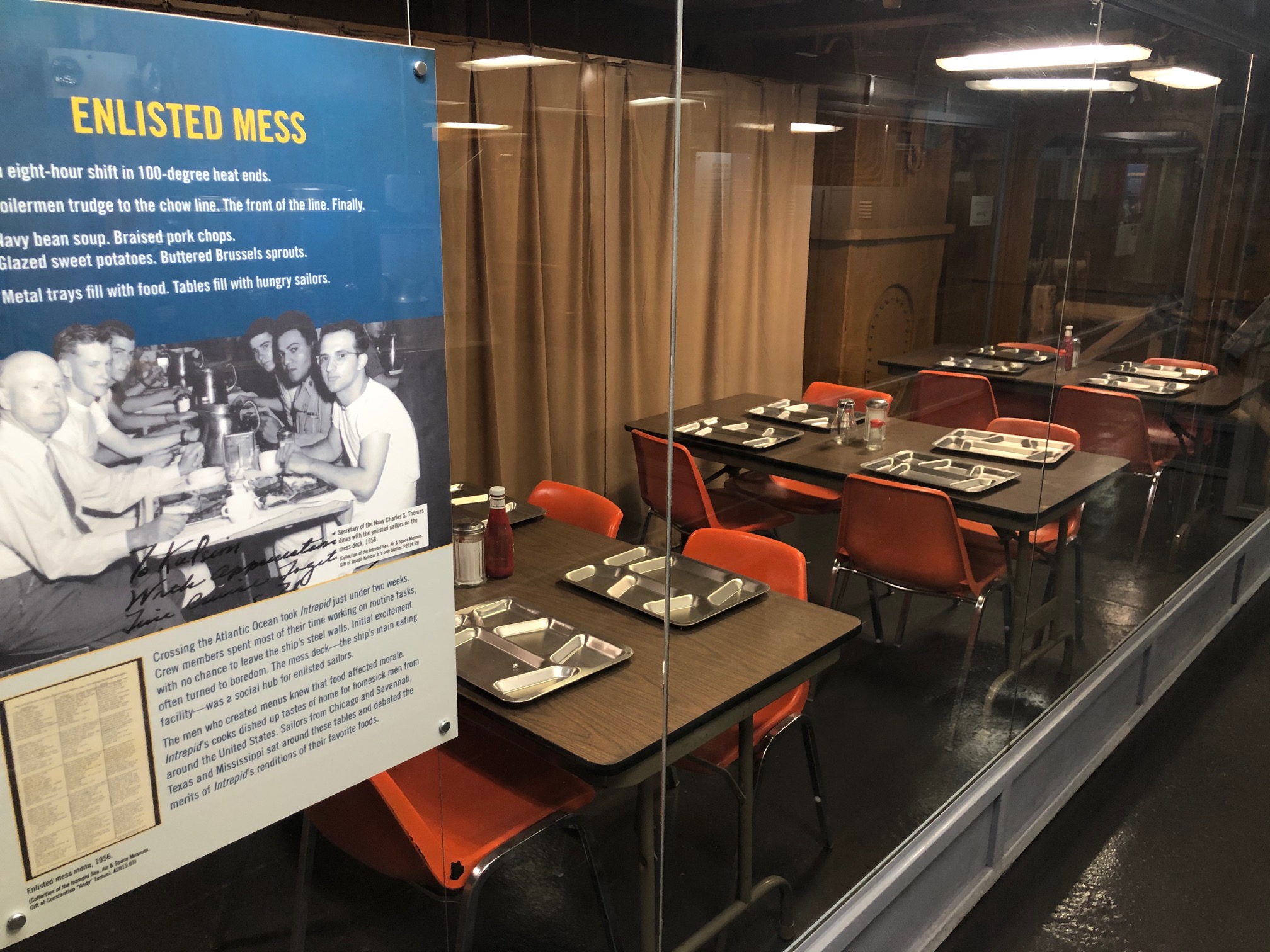 A section of the enlisted mess

Video description: Curator Jessica Williams stands in one of Intrepid’s galleys, or kitchens, and describes food service on Intrepid. Large steel tables, steam kettles, pots, bowls and other kitchen equipment are visible behind her. Historical photographs show sailors serving food on the chow line, preparing food and sitting at tables to eat. 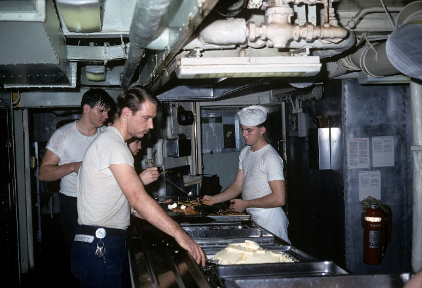 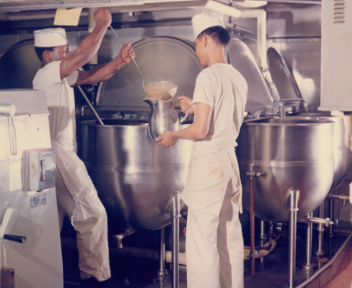 You are on the third deck of Intrepid, also known as the mess deck. Mess is the Navy word for dining. This deck is where Intrepid’s enlisted sailors ate their meals—breakfast, lunch and dinner. Every day, the cooks who worked on this deck prepared an average of 7,500 meals.


The galley of a ship is the kitchen. You can see one of Intrepid’s galleys through a glass wall. A recording plays the sounds of hissing steam and clanging metal. Intrepid had two galleys, each fully equipped with the same grills, fryers, and ovens you’d find in a large restaurant. Almost every surface in the galley is stainless steel. Pots and pans and utensils, counter tops, stoves, sinks, refrigerators. Everything. And over on the right is a row of 4-foot-tall (1.2 meter) stainless steel steam kettles for cooking soup and other food. A few white aprons hang from hooks in the galley too, making it look like the cooks just left.


Enlisted crew members ate cafeteria-style, and along the front wall of the galley is a cafeteria line with stainless trays they used. Crew members took their trays into one of the mess areas nearby. There isn’t one big dining room. Instead there are small groupings of three or four tables each, in small areas down the hall from the galley.


The décor is not what you might expect. One grouping of tables has red and white checkered tablecloths and a planter of plastic ferns, making it look a little like an Italian restaurant, representing how the mess looked in the early 1960s.


Two other mess areas are decorated with a Western theme and boast sections of wooden corral railing. One has a leather saddle hanging on a wood fence. Another has a black wagon wheel and horseshoes nailed to the wall. Yet another has a wooden fence with memorabilia hanging on it, including a bridle, handcuffs and replica wanted posters for the Dalton Gang.  None of this was here during World War II. In 1969 Intrepid’s supply officer assigned Robert Craig, a lieutenant junior grade, to redecorate the mess deck. Read the “more information” section to learn more about these decorations.


Not all crew members dined here. Officers and chiefs, who were high-ranking enlisted sailors, ate in their own dining areas.

Sailors aboard a ship could get tired of looking at endless steel walls. Intrepid’s colorful mess deck designs from 1969–1970 offered a welcome change of scene.


Meals gave weary sailors a chance to unwind—especially critical during combat. During the Vietnam War, the U.S. Navy funded improvements to shipboard living spaces. These projects were part of an effort to make naval service more appealing during a controversial war. Many men enlisted in the Navy to avoid the draft, but re-enlistment for junior sailors declined every year of the war and reached a nadir of just 10% in 1970.


Food Service Officer Robert Craig oversaw the redesign of Intrepid’s mess deck in 1969. A senior officer gave him this assignment because Craig painted with watercolors in his spare time. The ship had just returned from its third tour of duty in the Gulf of Tonkin and was in dry dock. Craig and his staff decorated spaces in Western and café themes using materials collected from yard sales. They blended standard naval paints to create custom colors.


Craig knew that the new décor was not exactly typical for a Navy ship. “I had been told to use my imagination in decorating,” he wrote, “and I would be the first to admit that orange and sunshine-yellow were not the most military colors available in the supply system.”

Food served in one day in the enlisted mess (1959)

Back to Third Deck